In mid-January, I stayed on a cacao farm in Grenada for a week to get involved in its daily operations and increase my understanding of producer/community dynamics. (See other posts for background on the purpose of the trip, and visits to cacao enterprises in Grenada.)

I visited the independent Caribbean island nation, pronounced “gruh-nay-duh,” not the Spanish-governed “gre-nah-dah,” a point that is often confused. The British and French colonized the island, which became independent in 1974. The U.S. invaded it in 1983, during the Cold War, but it did not fall under U.S. control.

Located in the lower Antilles, its primary agricultural products are nutmeg and mace (which covers the nutmeg shell) – thus its branding as “The Spice Island.” Cocoa is an important and growing crop. Its cacao is defined as fine-flavor, being predominantly trinitario. For much of the island’s yield, post-harvest processing (fermentation and drying) is done at centralized facilities governed by the Grenada Cocoa Association, a government-run entity that controls the purchase and sale of buys virtually the entire crop. Given these factors, Grenada’s cacao can fetch more than double the world market commodity prices. 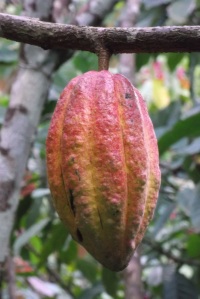 I chose to visit Grenada after scouring publicly available WWOOF lists and seeing a farm associated with the Grenada Chocolate Company (GCC), which I’d known about since working on Global Exchange’s fair trade campaign. I replied to the posting and, after emailing GCC founder, Mott Greene, got connected with Kim Russell, one of the famers who produces cacao for GCC. (GCC describes itself as a cooperative, but is more aptly a company that’s part owned by a farmer cooperative – currently nine with two more joining. According to Mott, the cooperative is the majority/largest shareholder (% not specified), and there isn’t a board including farmers, or other farmer representation in steering the business. (Read more about GCC and my visit to their shop and factory in part two of this blog.)

My week at Kim’s Farm, named Crayfish Bay, was a fabulous experience that offered more

than I expected. Kim is a Grenadian citizen ex-pat from the UK with a generous spirit, ingenuity and no-holds-barred honesty. He purchased a hurricane-stricken cacao estate that he’s been rehabilitating. It’s rich is biodiversity, with banana, oranges, mango and star fruit planted amongst the cacao, as well as other fruits like guava and soursop on the farm. (See farm photos.) On this site, he built his house and a 2-bedroom cottage for travelers, who are welcome to lend a hand on the farm, and join in meals and activities. The farm overlooks the ocean and is a haven for many birds(check out a video with bird singing) making it a beautiful place to

wake up each morning and watch the sunset and stars at night. (See photos of lodging & site.)

Kim’s partner, Yvonne, who is a terrific cook and cacao farm worker, and her two children, were often at Kim’s. It was a wonderful experience to engage with a local family, and inspiring to see Yvonne’s hard work and skill in so many areas. Unemployment and poverty are high in Grenada, necessitating ingenuity and effort to make ends meet. Two of Kim’s friends from the UK, Mark and Peter, were visiting at the same time, giving me a double dose of cultural immersion.

Kim his workers, and other volunteers had harvested cacao the week before I arrived, so one of my main tasks was to turn the cacao as it was fermenting (see photos). After workers cut cacao pods from the tree, they split them in half, scoop out the cacao beans and their sweet pulp, put this in a pile or contained space, and cover them with banana leaves, jute bags or the like. In the fermentation process, yeast 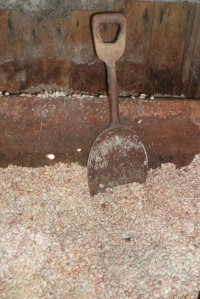 digests the pulp and converts it to ethyl alcohol. This develops cacao beans’ flavor. The cacao must be turned (moved to another bin or spot) to ensure even fermentation and temperature.

It was fascinating to see, smell and feel the transformation across the week, as the beans turned from white to orange to reddish brown and from purple to brown on the insides), consistency thickened so as to require more effort to turn each day (as liquid pulp drained), the pile heated up and the smell went from acetone to fruit-floral to toasted bread-tomato (like pizza, actually) to strong ammonia. Kim’s fermentation bins are split front to back, so I got a good workout lifting the cacao over the center divider. It was heaven for cacaophiles, as I was knee-deep in cacao (in knee boots) during the process.

When the beans were fully fermented (about five or six days in this case), I helped turn them in their drying bins to ensure even drying (see photos). In Grenada, workers traditionally shuffle through the cacao every 20 minutes, so thus did I. This was the first 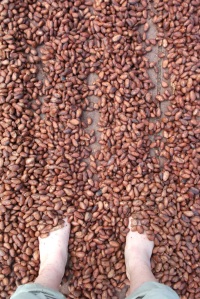 country where I’d seen this method, rather than the use of rakes.

I also helped clear weeds in the cacao orchard on two occasions, which is quite a labor intensive process (photos). This largely involved grazing a machete across the ground to clear fast-growing vines and grasses, done with extra care around cacao tree trunks, along with some targeted cutting at more resilient plants. The two primary farm workers, Gerald and Yvonne, had great skill and strength at this task, and I appreciated their humoring me to let me try my hand at it.

Apart from farm activities, I baked a few loaves of bread and banana bread, and helped make cocoa rolls. Cocoa rolls are basically pure hand-ground cacao liquor rolled into balls, which are used for “cocoa tea,” or pure hot

chocolate. One-third of a cocoa roll is as stimulating as coffee and will keep you going well through the afternoon. Yvonne heads up cocoa roll production, and the farm sells these direct and to various specialty chocolate companies, such as L.A. Burdick. To make cocoa rolls, the beans are roasted over a fire, hand peeled, hand winnowed by pouring from one calabash to another to remove remaining shells, hand ground with secret spices in something like a meat grinder, then rolled into balls. (See photos of process.)

The week involved lots of time to enjoy and explore the island—including a visit to GCC and a new, larger-scale chocolate factory, which you can read about in the next post.